Recently, someone I know has been quite vocal in his criticism of the LOST finale. He’s certainly not alone…there is a number of people out there who feel “cheated” by the finale. Here’s one of his comments: 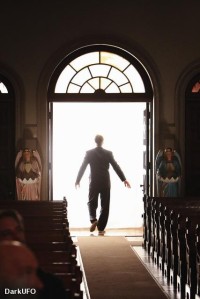 They didn’t know shit. They were making it up as they went along.

I get that though. They dug themselves a hole many times over.  I’m just astounded at the level of acceptance of that among a good portion of the fans.  Some seem perfectly happy to not know the answers.

Lindelof and Carlton Cuse had no idea where they were going with LOST – that changes were made to the plot and story as seasons progressed.

Of course they did! That doesn’t change the concept of the show; nor does it alter the original story presented. Many factors have altered the course of the story over the years, among them the popularity of the Benjamin Linus character and Adewale Akinnuoye-Agbaje’s desire to leave the show (and subsequent refusal to appear in the finale).

Knowing this is someone who views all things in black and white, I’m not surprised by his cynicism regarding the LOST finale. He is, after all, one of those people who only thinks in absolutes. What does surprise me though is that someone who purports to be intelligent can honestly think that one guy can come up with an idea for a series and map it out word for word for six seasons. Of course not!

Over three years ago, in January 2007, prior to the relaunch of the strike-interrupted Season 3, Damon Lindelof spoke of the future – and past – of LOST:

This show is about people who are metaphorically lost in their lives, who get on an airplane, and crash on an island, and become physically lost on the planet Earth. And once they are able to metaphorically find themselves in their lives again, they will be able to physically find themselves in the world again. When you look at the entire show, that’s what it will look like. That’s what it’s always been about.

LOST never was intended to be about smoke monsters, hatches, whispers, or a myriad of other story-telling plots used by Damon Lindelof and Carlton Cuse in telling the story created by J. J. Abrams.

LOST was a complex character study emphasizing the fact that life is not all black and white, cut and dried, all-or-nothing philosophy. No other television show could pull off what the writers and producers of LOST accomplished: To tell a tale of love, life, death, and redemption while allowing it’s core of loyal fans the opportunity to fill in the blanks.

Has any other show in the history of television enabled it’s listeners the ability to discuss it at such great length and with such great passion that they have the werewithal to come up with their own answers to some of these questions? That, for years to come, they will still be answering those questions and discussing them? I think not.

The fact is, there was a master plan to LOST. Unfortunately, some just haven’t “seen the light”. Perhaps someday we’ll meet them at The Crossroads.